So, I finally broke down today and made a decision on new luggage. Kurt is so like a girl in travelling, so every time we travel, he uses our large piece of luggage and I have to use the small piece. THEN, he takes up part of mine with his stuff. He has to literally pack every single thing he owns. My Dad bought us a piece I love in red, hardside, a few Xmases ago, which gave us THREE pieces of luggage, and really helped out. So, Kurt would get two huge pieces of luggage and I got one small piece (but all to myself now, LOL).

Anyway, Kurt's last business trip, I think the one to Atlanta or Cincinnati, was a sad one for my fav piece of luggage. The handle totally broke off, and it is not reparable. Therefore, the conclusion from that if I am back to letting Kurt have almost all the luggage space. sigh. I made the decision that I needed to buy new luggage. The stuff we have left my Mom bought me when I graudated from high school and it is just now starting to fall apart. call me conceited, but it is embarassing to land in a new city with luggage that is starting to look like I have owned it my entire life. Also, when we first got our red luggage, it was nice because red was not a common luggage color, now, everyone has had the same idea as us with getting an uncommon luggage color, and now red is common.

So, I broke down today and bought two new pieces of luggage. I cannot wait to put all our other stuff on the curb and take my nice shiny new pieces to Hawaii in December! I got a blue color, click here to see what it looks like in red. I could not find a pic in blue.
Composed By: Lori Anne Haskell at Sunday, November 13, 2005 No comments:

I have not posted in forever! We have been slammed since we got back from Vegas on Monday morning. 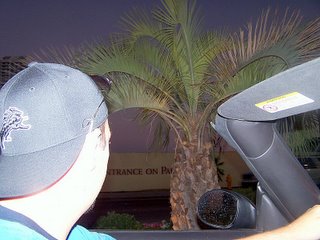 Speaking of Vegas, we had a blast. I am decided that early November is the best time, temperature-wise, to go there. It was about 72 each day. We could ride around with the top down during both day and night.

I love all the palm trees in Vegas. While driving, I tried to snap a couple pics of them, from the car underneath the trees lining the strips. 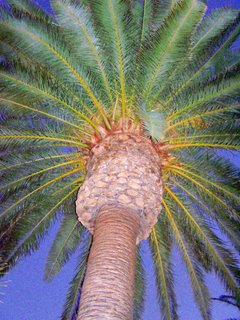 We had an awesome room. It was on the top floor of the Stratosphere, which is one of our fav places to stay at because when you rent a car, you don't want to stay mid-strip because of traffic. We were in an Executive Suite and it was literally one of the nicest rooms I have stayed in. Besides that, we had an amazing view of the entire strip. 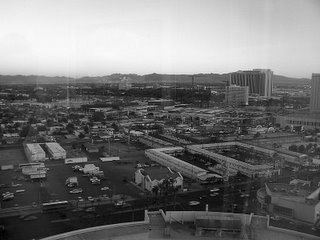 Mostly, we played Poker while there at the Palms and Imperial Palace. I also did some shopping at the area in Aladdin, and we saw a great show at the Wynn called La Reve. Beautiful show. The entire theatre was circular and the show was part in water, part out. At the Wynn, we also visited the new Ferrari store and showcase and I SO want one now. Here is the next car I want (too bad it's 2.5M): 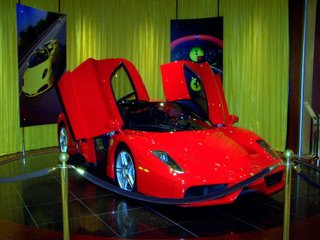 We ate at some favorites, and tried the buffet at the Wynn. Their lunch buffet was the best I have ever eaten, and really catered to a seafood/vegetarian crowd. Yay!

On the flight on the way home, towards the end of it, the flight attendant came over the loudspeaker and asked if there was medical personnel on board! A doctor and two nurses ended up being on the plane. A lady has passed out and her companion could not wake her! They ended up pulling her out of her seat and lying her on the floor of the plane, then dragging her into the back where they somehow revived her. When we landed, the paramedics came on the plane and took her away in an ambulance. All kinda freaky!

How Weird Are You?
Composed By: Lori Anne Haskell at Friday, November 11, 2005 2 comments:

Don't Like Her, but she has GREAT taste in music, LOL

Which Musician (or Group) Shares Your Taste in Music?
Composed By: Lori Anne Haskell at Thursday, November 10, 2005 No comments:

Could You Pass the US Citizenship Test?
Composed By: Lori Anne Haskell at Wednesday, November 09, 2005 No comments:

I Think I have a Sister, LOL

What Does Your Birth Date Mean?
Composed By: Lori Anne Haskell at Sunday, November 06, 2005 No comments: