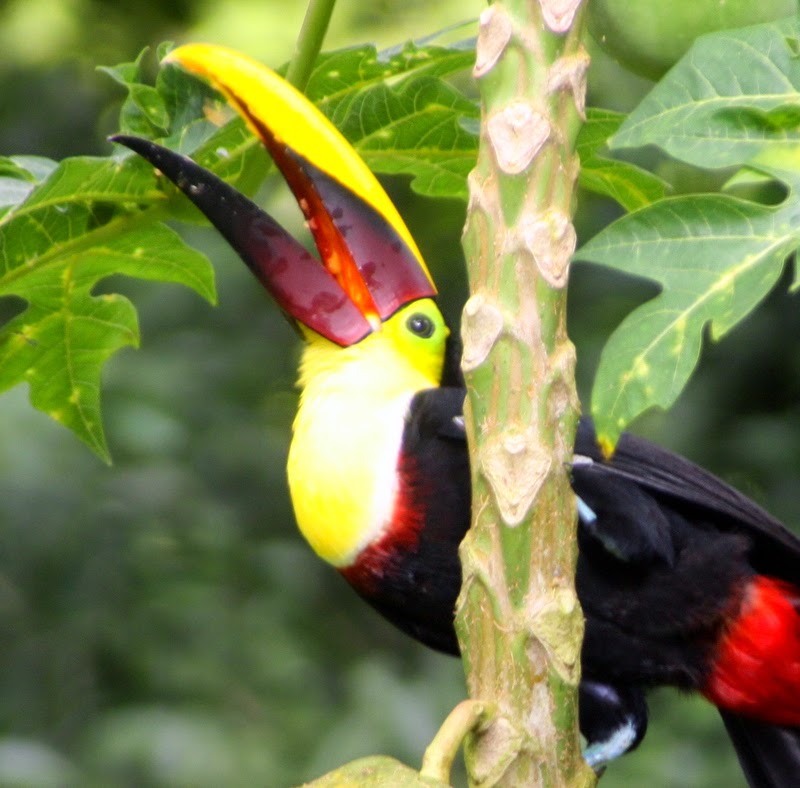 Had an awesome day two days ago.  I had walked over to the kitchen sink to put something in there, and looked out the huge window that overlooks the backyard.  In the papaya tree, which is about 10 feet outside the window, was a toucan!  We have seen toucans at the house before, but usually pretty high up and far away in trees.  This was SO CLOSE.  The toucan was eating a papaya.  We don't pick them as we were hoping eventually animals would come eat them, and I so lucked out!  I took some pics through the kitchen window as I did not want to go outside and scare the toucan away.  After that, I noticed two more toucan in a tree right behind the papaya tree.  I stood there on and off most of the day watching them.  They are such awesome animals.  While there, I ended up seeing a Hoffmann's woodpecker, and two different Brown Jays, as well as a squirrel.  I guess it was animal day in the backyard! 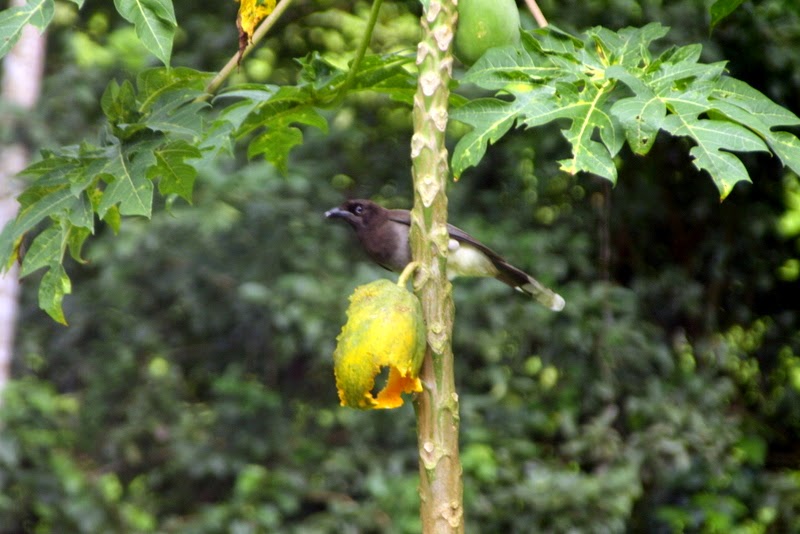 I have a sinus infection, ugh.  Started yesterday and today, after getting up at 830 AM, I slept the rest of the day on the couch.  We had some more grass squares delivered and Kurt put those in while I slept.  Around 600 PM, I started getting hungry but did not have the energy to cook, so we headed into town to TacoBar and then stopped at the farmacia to get some meds for my ailment. 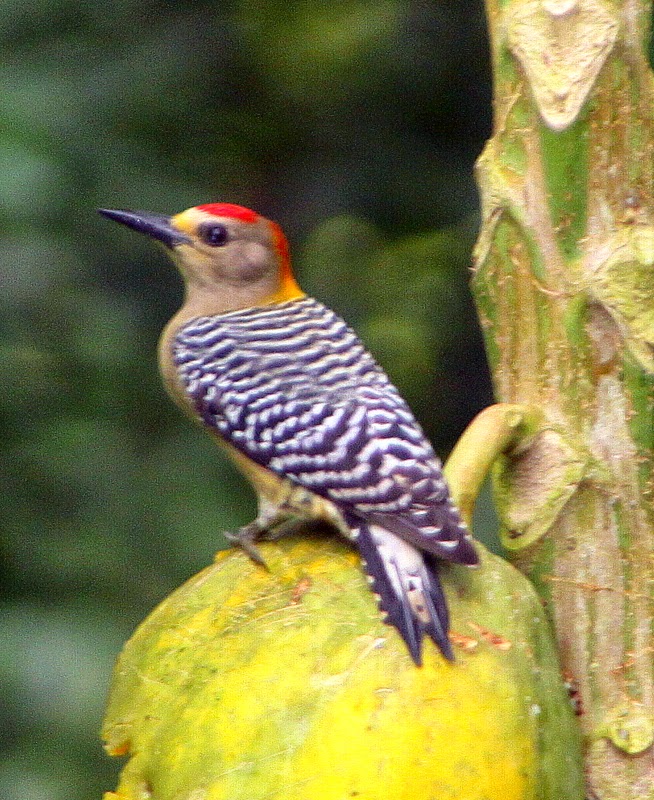 Tomorrow is Thanksgiving in the USA!  It is not a holiday here, but many expats celebrate and many restaurants have turkey and such on the menu.  Since we don't eat meat, Thanksgiving food is not anything I care about anyway.  we are usually in Vegas on Thanksgiving though, this will be the first year in a while we did not go, nor have the desire to go. 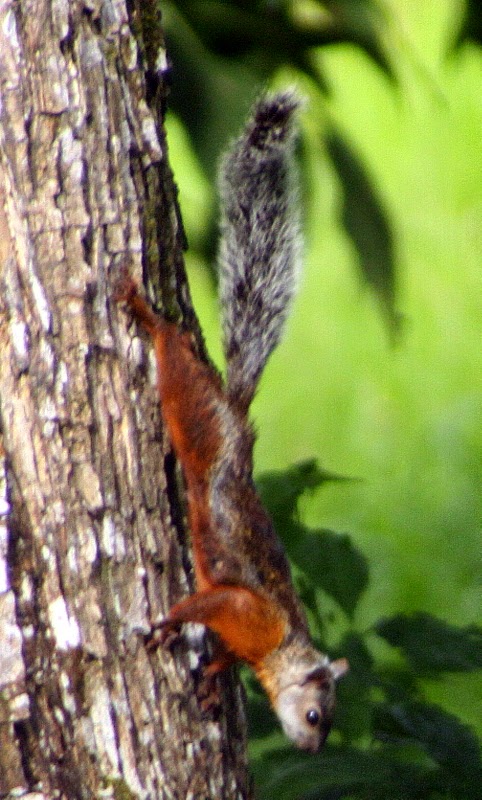 I finally started doing Rosetta Stone again, which is awesome.  Glad to be teaching myself Spanish again.

Composed By: Lori Anne Haskell at Thursday, November 27, 2014 No comments:

Trip to the States

I took a trip to the States from November 10 to November 16 to visit my Mom and Grama in Florida.  My Grama lives in Port Richey Florida in the summer months.  I timed the flights so my Mom and I arrived in Michigan at the same time and left around the same time flying American Airlines.

I grabbed a ride to the airport with my friends Shawn and Chelsea since they were leaving Costa Rica the same time I was.  More on that later.  Trip to airport was fine. I was a tad concerned as there had been news that some landslides on the main highway has put traffic down to one lane, but it did not affect our travels at all.  Had lunch at Smash Burger in the airport with my friends and then my flight took off right on time!  :).  Got to Miami cleared customs and security again and made it to Tampa.  Got my luggage and then waited for my Mom's flight to land. Got her and headed over to Super Shuttle for our ride to Port Richey.  Got there at around 1100 PM.

Had a nice time in Port Richey.  We played Euchre at the club house, went shopping, got my hair cut with Maga at her salon, had my hair colored by my mom....went out to eat at the places we like.  Also all the stuff I had sent to Maga's in the mail we opened and packed up for me to bring back.  Had dinner one night too with Aunt Louise and Gail and Theresa and it was awesome to see all of them too.

My flights back were uneventful.  Took the Interbus shuttle back to Herradura and that went smoothly too.  Was really happy to be back in the nice weather here.  Never thought I would say this ever but Florida was chilly!  Crazy!

Before I left for Florida, we got into a scooter accident.  It was pretty scary.  A truck clipped the back of the scooter and we both flew off.  The truck was speeding around another vehicle as we were turning onto the main highway.  Anyway, I got really bad road rash on my leg and shoulder and my neck and shoulders were pretty sore after that.  Its been over a week and I am finally starting to feel like I am healing.  It could have been way worse though and Im thankful we are alive. People drive HORRIBLE here.  Weirdly, it was someone from the States who hit us.  He brought us home and our scooter in his truck.  We called insurance and they are fixing the bike, picking it up tomorrow.  Glad we have a back-up form of transportation.  I am still having flashbacks and nightmares though.  Ugh.

The weekend before I left, my friend Shawn and his wife Chelsea visited Jaco!  They stayed at the hotel right by my house and loved it.  We hung out with them quite a bit, went to the bar and sang karaoke, watched the Lions game, lots of meals out....it was super fun.  Was super fun to show them around my Paradise.  Cant wait until they come back to visit again!  :)

Kurt painted the living room while I was gone.  He is still finishing up some spots, but I will try and post pics when he is done.  The color is a brownish gray, hard to describe but matches the kitchen perfectly.  I love it.  I hated the old color.

I have lots more to post about, but need to start making dinner so I will post later.  Pura Vida!