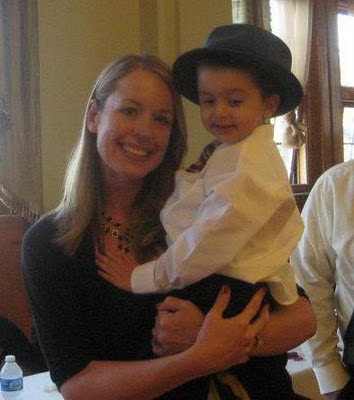 Have not posted in forever--been busy, and I always feel weird posting when so many people I don't know personally are visiting the blog to read Kurt's posts about the trial. But, whatevs. This was initially MY blog and was taken over by Kurt, so people can just skip over this, ;).

Trying to think of anything relevant that has happened recently to blog about since my last post, which was San Fran related......

Went to Manistee to a wedding in late September, one of my sister's best friend's, Tara, from high school got married. I left work early, around noon, and headed to Manistee. Got stuck in stopped traffic on the Zilwaukee bridge for an hour, which sucked, but got to Manistee around dinner time. Got there and was greeted by baby Nick, who RAN out the door to greet me and hugged me! He kept saying "Hi Aunt Lordie!" Too cute. Quite the difference from the super shy little boy I got to hang with last trip! :). Was so happy to see him. My sister had a rehearsel dinner to get to, so Nick, my Mom and I headed to Ludington to have dinner at a Mexican restaurant and stops at Meijer and Maurices. Ended up buying a cute new pair of jeans at Maurices, and after coupons and sales, I paid a grand total of $11.00. Score. Next morning, headed out for a 5 mile run. LOVE that Manistee has sidewalks (which are lacking in Newport). Did a tiny bit of shopping with my Mom, then headed to the wedding. It was gorgeous and took place in the Ramsdell Theatre, which is a historic theatre in Manistee (i was actually in some plays during junior high and high school while living there). Reception was in the ballroom at the theatre and super fun as well. Nick danced with us the entire night, which was super cute. We left kinda early to get Nick home to bed, and stopped and picked up my fav food in the world, Big Al's breadsticks, on my way home. To die for. I forget all about counting calories when those breadsticks are in the room.......I only get them once or twice a year, so whatever. Sunday, took another run, then stopped at some stores and at a coffee shop with my Mom. Left around 2 to come home. Way too quick of a trip. Wanted to see some other people while there, but there was just not time. Need to plan another trip soon.

Tigers are in the playoffs! Whoot! Kurt and I went to both home games. The first we took the office and their significant others and my Dad, and the second, was just us. Had a blast at game one. Awesome. Game two, not as fun, horrible loss. Have tickets to two games this week, and will get them to game three if it goes that far. Who knows. Was so psyched to eliminate the Yankees, who I hate, and was happy to see the Phillies eliminated since they are so talented. Was thinking about going to Monday night football, but decided no as tickets are crazy expensive, and with the Tigers game, I dont want to put too much on my calendar. 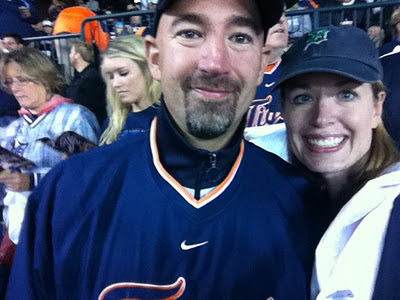 Did one run last weekend called the Red October Run in Wayne, MI. I was set to run my first 10K, but ended up doing a 5K since I had a really bad cold and did not want to overdo it. Boo. My goal was simply to get through the race since I could barely breathe, and I did. I really liked the course. There were a TON of people too, I did not even come close to placing. Which I was OK with since I was sick and it was kinda cold out. So, I got to come straight home and rest up for the work week. 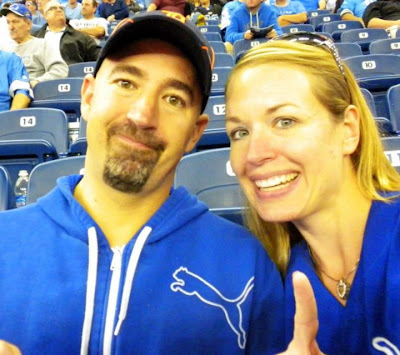 Also, went to Lions opening day! Have not been to a Lions game in forever (since we stopped our season tickets many years back). Had awesome seats on the 45 yard line behind the visitors side, row 4 first level. Seats were amazing. Game was incredible. I don't remember being at a better game ever for the Lions. It was crazy and almost unreal........Loved every second. Except for the reallllllly long lines and security to get in. How obnoxious. They had separate lines for men and women, so Kurt and I totally got separated and ended up just meeting at our seats.

Was so happy for some nice weather this weekend! Went running outside both Friday and Saturday, Saturday at the park since it was still light out when I went. I am still really leery running outside on the street. Every car that goes by, I flinch. Wish I could get over this fear. I still have not taken a bike ride since the accident, but I might try that tomorrow. Am slightly terrified though. Boo.

Anyway, Tigers game coming out of rain delay, so I gotta watch......Night!
Composed By: Lori Anne Haskell at Saturday, October 08, 2011

I think it might be time for Kurt to get his own blog. Your posts are so different from each other's in tone and topic. It seems a bit odd to have them intermingled here.

haha, that's funny......Kurt will never take the time and energy to start his own blog, LOL. My guess is once this trial is over, he will never post again. But, yea, it would be easier if he had his own.

Heard about the blog on Alex Jones today. Got to read your blog first about going to Manistee! I just moved from there in March (kids both graduated from there) and am actually moving back in the near future. It's a beautiful town :) Hope all goes well for Kurt at the trial!

Nice post! How many races total have you done since you started??

This is Kurt. I am intentionally not separating the blogs for two reasons:

1. It shows anybody that doesn't know us that we are just normal people.
2. If there was a separate underwear bomber blog, people would say that my story isn't true and that I am just trying to get publicity.

Kurt, I understand your point of view regarding the blog. After reading your story last night,for the first time,I understand how you feel about trying to show people you are just 'normal' people. When my situation was still new, I felt that was a possibility also.

I believe that your safety will come from you telling your story, as honestly and intelligently as you can, to as many people as you can. Those that believe you are just trying to get publicity, will believe that no matter what you do.

From my perspective you and Lori are not "...just normal people." In today's society many normal people would never exhibit the courage and patriotism that the two of you have.

I urge you and Lori to remove all of your personal information, day-to-day activities, interests,pictures, etc. off the internet ------until this nightmare subsides.

There are no words adequate to express my gratitude, as an American citizen, to you and Lori for the courage and true patriotism you are exhibiting.

That being said----------be careful. I see your intelligence and I know that you are aware of some of the difficulties you might be faced with. I am just not sure, at this stage of it all, that you can truly wrap your head around what can happen to your family.

You and your family are in my prayers and will be every day.

Kurt you are a courageous American to represent your client zealously in today's impatient climate.
But be careful of the star chamber, yikes!
G-d bless you and your family.
Perhaps a separate blog might be necessary.
Can't wait for the novel

Tigers WIN! The D is still in it and I'm pumped!

Kurt/Lori, I think it's damn cool you don't do separate blogs. I'm from Toledo and attended many Tigers and Lions games as a kid (thanks Dad!). I'm also an avid Jones listener and truth seeker since 2006. I can't begin to express how proud I am of you guys. You're Motor City tough personified, and I commend you for risking it all for the betterment of humanity! You will go down in American history as effin' heroes!

Also, Kurt, for the sake of brevity, you might consider purcasing a $10 domain name, like Haskell.com or DetroitTerror.com. Just something you can say over the radio, that isn't too long. When you give the specific blog address, it's too long for the below average Internet person to access. Something simple that merely redirects to the blog could increase traffic.

Just go to GoDAddy.com, or your favorite domain seller, buy the domain, and redirect the domain to your blog. Other than the domain purchase, it's free to forward (redirect) the domain to this blog.

I did this with my business, and it works great. My business address was (not my real address, mind you) WidgetsFoundInNorthwestOhio.com and bought OHWidgets.com for radio and TV spots. It's so much easier for people to remember and only cost $10 per year and 15 minutes of time to easily set up. Very easy. Very smart.

If you need some help with this or further info, drop a comment, I'll see it.